Here’s an article I enjoyed from The Wall Street Journal. I thought you might enjoy it also.

Thank You. No, Thank You by Melinda Beck

It turns out, giving thanks is good for your health.

A growing body of research suggests that maintaining an attitude of gratitude can improve psychological, emotional and physical well-being.

How Grateful Are You?

Take a test. (click on the image below to go to the interactive test) 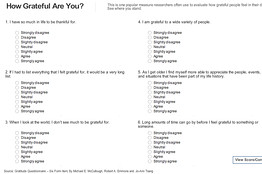 Adults who frequently feel grateful have more energy, more optimism, more social connections and more happiness than those who do not, according to studies conducted over the past decade. They’re also less likely to be depressed, envious, greedy or alcoholics. They earn more money, sleep more soundly, exercise more regularly and have greater resistance to viral infections.

Now, researchers are finding that gratitude brings similar benefits in children and adolescents. Kids who feel and act grateful tend to be less materialistic, get better grades, set higher goals, complain of fewer headaches and stomach aches and feel more satisfied with their friends, families and schools than those who don’t, studies show.

“A lot of these findings are things we learned in kindergarten or our grandmothers told us, but we now have scientific evidence to prove them,” says Jeffrey J. Froh, an assistant professor of psychology at Hofstra University in Hempstead, N.Y., who has conducted much of the research with children.

“The key is not to leave it on the Thanksgiving table,” says Robert Emmons, a professor of psychology at the University of California-Davis and a pioneer in gratitude research. And, he notes, “with the realization that one has benefited comes the awareness of the need to reciprocate.”

Philosophers as far back as the ancient Greeks and Romans cited gratitude as an indispensable human virtue, but social scientists are just beginning to study how it develops and the effects it can have.

The research is part of the “positive psychology” movement, which focuses on developing strengths rather than alleviating disorders. Cultivating gratitude is also a form of cognitive-behavioral therapy, which holds that changing peoples’ thought patterns can dramatically affect their moods.

It’s possible, of course, to over-do expressions of gratitude, particularly if you try to show it with a gift. “Thanking someone in such a way that is disproportionate to the relationship—say, a student giving her teacher an iPod—will create resentment, guilt, anger and a sense of obligation,” says Dr. Froh.

Gratitude can also be misused to exert control over the receiver and enforce loyalty. Dr. Froh says you can avoid this by being empathic toward the person you are thanking—and by honestly assessing your motivations.

In an upcoming paper in the Journal of Happiness Studies, Dr. Froh and colleagues surveyed 1,035 high-school students and found that the most grateful had more friends and higher GPAs, while the most materialistic had lower grades, higher levels of envy and less satisfaction with life. “One of the best cures for materialism is to make somebody grateful for what they have,” says Dr. Froh. 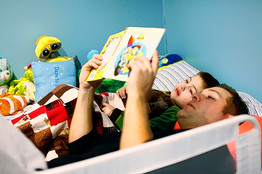 Michael Rubenstein for the Wall Street Journal – Gratitude researcher Jeffery Froh reads to his 4-year-old son, James, at bedtime, when James talks about his favorite things from the day.

Much of the research on gratitude has looked at associations, not cause-and-effect relationships; it’s possible that people who are happy, healthy and successful simply have more to be grateful for. But in a landmark study in the Journal of Personality and Social Psychology in 2003, Dr. Emmons and University of Miami psychologist Michael McCullough showed that counting blessings can actually make people feel better.

The researchers randomly divided more than 100 undergraduates into three groups. One group was asked to list five things they were grateful for during the past week for 10 consecutive weeks. The second group listed five things that annoyed them each week and the third group simply listed five events that had occurred. They also completed detailed questionnaires about their physical and mental health before, during and after.

Those who listed blessings each week had fewer health complaints, exercised more regularly and felt better about their lives in general than the other two groups.

Drs. Froh and Emmons conducted a similar study with 221 sixth- and seventh-graders from Candlewood Middle School in Dix Hills, N.Y., an affluent area on Long Island. Although the effects weren’t as dramatic as with the adults, the students in the gratitude group did report a higher level of satisfaction with school and more optimism than the students who listed irritations, according to the study in the Journal of School Psychology in 2008.

As simple as it sounds, gratitude is actually a demanding, complex emotion that requires “self-reflection, the ability to admit that one is dependent upon the help of others, and the humility to realize one’s own limitations,” Dr. Emmons says.

Being grateful also forces people to overcome what psychologists call the “negativity bias”—the innate tendency to dwell on problems, annoyances and injustices rather than upbeat events. Focusing on blessings can help ward off depression and build resilience in times of stress, grief or disasters, according to studies of people impacted by the Sept. 11 terror attacks and Hurricane Katrina.

Some Techniques To Help Kids Be Grateful 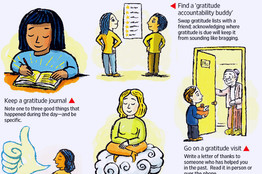 Can people learn to look on the bright side, want what they have and be grateful for it? Experts believe that about 50% of such temperament is genetic, but the rest comes from experience, so there’s ample opportunity for change. “Kids and adults both can choose how they feel and how they look at the world,” says Andrew Greene, principal of Candlewood Middle School, who says that realization was one of the lasting legacies of Dr. Froh’s research there.

Some experts believe that children don’t develop true gratitude until they can experience empathy, which usually occurs around age 7. But researchers at Yale University’s Infant Cognition Center have shown that infants as young as 6-months old prefer characters who help to those who hinder others. To help lay the groundwork for gratefulness, Dr. Froh says he asks his 4-year-old son, James, each night what was his favorite thing about the day and what he is looking forward to tomorrow.

For older children and adults, one simple way to cultivate gratitude is to literally count your blessings. Keep a journal and regularly record whatever you are grateful for that day. Be specific. Listing “my friends, my school, my dog” day after day means that “gratitude fatigue” has set in, Dr. Froh says. Writing “my dog licked my face when I was sad” keeps it fresher. Some people do this on their Facebook or MySpace pages, or in one of dozens of online gratitude groups. There’s an iPod app for gratitude journaling, too. The real benefit comes in changing how you experience the world. Look for things to be grateful for, and you’ll start seeing them everywhere.

A Buddhist exercise, called Naikan self-reflection, asks people to ponder daily: “What have I received from…? What have I given to…? and What trouble have I caused…?” Acknowledging those who touched your life—from the barista who made your coffee to the engineer who drove your train—and reflecting on how you reciprocated reinforces humbleness and interdependence.

Delivering your thanks in person can be particularly powerful. One study found that fourth-graders who took a “gratitude visit” felt better about themselves even two months later—particularly those whose moods were previously low.

Adopting a more upbeat mind-set helps facilitate gratitude, too. Instead of bonding with friends over gripes and annoyances, try sharing what you’re grateful for. To avoid sounding boastful, focus on giving credit to other people, as in, “My mom took a whole day off from work to get to my game.”

Studies show that using negative, derogatory words—even as you talk to yourself—can darken your mood as well. Fill your head with positive thoughts, express thanks and encouragement aloud and look for something to be grateful for, not criticize, in those around you, especially loved ones. New York psychiatrist Drew Ramsey says that’s an essential tool for surviving the holidays. “Giving thanks for them helps you deal with the craziness that is part of every family,” he says.

Last, if you find you take too much for granted, try the “It’s a Wonderful Life” approach: image what life would be like without a major blessing, like a spouse, a child or a job. In a 2008 study in the Journal of Personal Social Psychology, researchers found that when college students wrote essays in which they were asked to “mentally subtract” a positive event from their lives, they were subsequently more grateful for it than students whose essays simply focused on the event. The “George Bailey effect” was modest, the authors noted, but even small boosts in positive emotions can make life more satisfying.